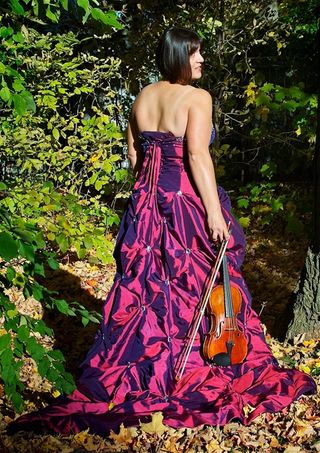 Ralitsa Tcholakova is an internationally known violin/viola player based in Ottawa. She obtained a Master's Degree from the State Academy of Music in Bulgaria, and a Diploma from the Hochschule fur Musik und Darstellende Kunst in Vienna.  Tcholakova has performed as a soloist with orchestras and at chamber music series and festivals in Argentina, Austria, Belgium, Bulgaria, Canada, Chile, Croatia, Czech Republic, Denmark, Ecuador, France, Germany, Macedonia, Paraguay, Russia, Slovakia, Slovenia, Serbia, Switzerland, USA and Uruguay. Her concerts have been recorded for broadcast for CBC and other radio stations in Canada, as well as for Bulgarian and Argentinean National radio and television She is the recipient of numerous bursaries, scholarships, awards and grants such as Svetoslav Obretenov Bulgarian National Competition, Sarasota Kiwanis Club, Baden - Baden Lion's Club, Ottawa Symphony Orchestra, Austrian Ministry of Culture, FACTOR, Europe 2000, Ottawa City Arts Funding, Canada Arts Council, SOCAN foundation, Schenkman Arts Centre and the Canadian Department of Foreign Affairs.

She has been a Long Term Artist in Residency at the Banff Centre for the Arts. During her residency at The Banff Centre, Tcholakova was involved in more than 25 concerts, including Chamber Music performances with Lawrence Lesser and Gilbert Kelish. Currently she is working on her Doctoral dissertation “Canadian Violin Concertos and their Stylistic Characteristics”.

Tcholakova is also a published author. In 2006, her essay Footsteps to Eternity about Mozart's life, was published in the first anthology book in connection with the celebration of the composer's 250th birth anniversary in Bulgaria. The anthology Mozart-Genius is a project sponsored by the Austrian Embassy in Sofia, Bulgaria.

In 2008 her paper on "Women Composers from Quebec city" was published in a Journal for Canadian Studies in Argentina.

Ralitsa has recorded a numerous CDs with grants from FACTOR and Ottawa City Arts Funding such as "Soul of Tango", "Remembered Voices", "Ballade of the North", "Rally Live"  in concert etc. Her CDs are highly acclaimed. The CD "Ballad of the North" consisting music by Canadian women composers received a grant from SOCAN foundation towards international distribution to 135 radio stations around the world.            "As a violin and piano recording, this one is immediately evident as being at the top of the genre. Performers are first rate, and playing with a passion. Audio production is unusually well done ...Excellent choices were made for the music on this CD. ...Tcholakova and Keillor show an admirable commitment to Canadian repertoire, beginning with Gena Branscombe's unjustly neglected A minor Sonata, well represented in this performance." And the review ends: "An excellent CD." (Whole Note magazine)

"Tcholakova and Keillor are wonderful collaborators who perform with sound musical chemistry. They present a polished, single-minded vision of the music and are able to create all the necessary moments of passion, lyricism, austerity, and dramatic climax. Tcholokova's intonation is excellent, and she possesses a rich and vibrant tone in the gypsy music, and one that is more subtle and intensive in the more serious works... These are voices worthy of remembering." (IAWM Journal)

Ralitsa Tcholakova is an internationally renowned, Ottawa-based violin and viola player, currently on the Faculty of Music at Carleton University. She has performed as a soloist with orchestras at chamber music series and festivals in over 25 countries. She was nominated for Premier's Award for Excellence in the Arts for 2018. In 2017, she was nominated for the GG's Persons Case Award. Ralitsa has recorded many highly-acclaimed albums, including “Ballad of the North”, an album featuring music by Canadian female composers and distributed by SOCAN to 135 radio stations worldwide. Her CD, “Aboriginal Inspirations” featuring Grammy winner Ron Korb is promoted nationally and internationally by the Canadian Music Centre and NAXOS. She is currently working on two solo violin CDs, one in collaboration with Centrediscs and Sinfonia Toronto featuring violin concertos by Canadian composers and a CD with music by Latin American composers. Since 2015, Ralitsa performs annual recitals in the Senate of Canada.